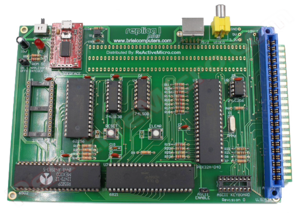 The ReActiveMicro Replica 1 was created by Vince Briel of BrielComputers.com in 2003 with the more advanced Replica 1 Plus being created in mid 2014. Briel Computers specialized in retro hobby computer kits. They started in 2003 with a replica of the first Apple Computer, the Apple 1. Briel Computers focused on developing computer kits and boards like those you could purchase in the 1970′s and early 80′s.

As of 2015 Briel Computers ceast operations and stopped accepting orders.
In September 2017, ReActiveMicro contacted Vince about reproducing the Replica 1 Plus and it was once again made available for sale by ReActiveMicro. 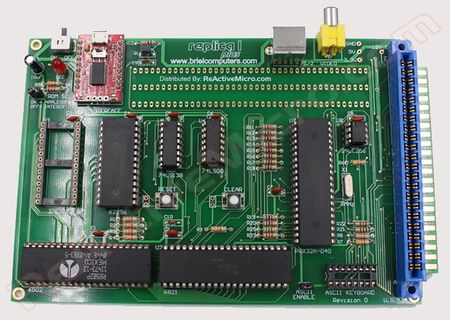 A few users have reported every few seconds a "/" appears on their screen followed by a linefeed. This renders any data entry impossible. The issue isn't present when connected to a PC, or sometimes when the Replica 1 is powered on while the motherboard is sitting on pink ESD foam. This is mainly due to the fact the Replica 1 is being powered by a PSU with an isolated ground. Meaning the ground or common is NOT connected to the PSU's ground. So the Replica 1 acts like an antenna.

There are several options to resolve this issue. First, confirm the noise issue is related to an isolated ground issue. Simplest is to power the Replica 1 using a USB cable to a computer or laptop. These should supply a good ground. Another option wold be using a jumper wire/clip to connect the Replica 1 to ground. If the noise goes away and you can enter commands using the keyboard reliably then isolated ground is your issue.

Other noise related issues could be needing the newest firmware: Reprogram the Replica 1 with the most current firmware. If this doesn't work try adding a 100k resistor to the USB module as pictured below. And if there is still noise then add a .1uF cap (100nF) to Pin28 of the Micro Controller to either Ground or +5v. The resistor and cap fix work for either firmware. However the firmware is usually the first thing to try since it's usually the simplest for most users.

BASIC comes in ROM. Be sure the "ROM SEL" jumper is ON to select Applesoft. Then type "E000R" and hitting the Enter key. If it fails to run then press you Caps Lock, Control, Alt, etc keys then retype and press Enter. Some keyboard don't play well with the Replica 1 and pressing these extra keys can sometimes reset the keyboard to better sync to the Replica 1.

KRUSADER is a program written to allow assembly language development on the Replica 1. It is included with the current distribution from ReActiveMicro within the Integer ROM selection. Be sure the "ROM SEL" jumper is OFF to select Integer. Then type "F000R" at the prompt and press Enter to start Krusader. If it fails to run then press you Caps Lock, Control, Alt, etc keys then retype and press Enter. Some keyboard don't play well with the Replica 1 and pressing these extra keys can sometimes reset the keyboard to better sync to the Replica 1.