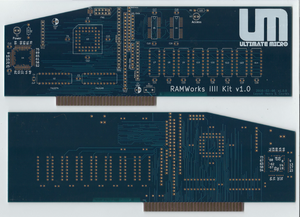 Alpha Version: Development started on January 29th, 2016 by creating an Alpha PCB layout based on the original RAMWorks III design by AE and combining the "Proof of Concept" and "Alpha" phases. We knew from experience with the IIgs 8 Meg RAM Card project and the datasheet of the proposed DRAM that it will easily emulate the older 256k DRAMs that were used on the original RAMWorks III, so we skipped the Proof of Concept phase. The Line Driver ICs were kept in the design as they are needed to drive the Apple II buses. However the rest of the RAMWorks III circuits would be moved in to a CPLD. Any changes or mods needed to the PCB could easily be made using flywires.

Second, the RM logo was added to the front and rear of the PCB.