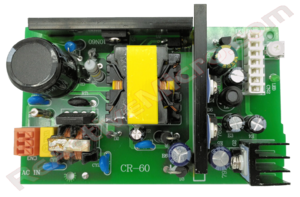 The Current Version Of The Apple IIc+ Universal PSU

The Apple IIc+ Universal PSU was conceived, created, and designed by Henry of ReActiveMicro and released for sale to the Apple II Community on September 29th, 2018. Mark Wise however originally had a clone produced back in 2014 which he offered for sale on the Apple II facebook group in 2014. Mark however was unable to have new units produced so ReActiveMicro stepped in to help fill the need in the Community.

How much more do you want or expect from a piece of equipment that was only designed to last a few years at most? Do you really believe Apple designed the power supply to last 30+ years? Most people are either unaware of the potential dangers of continuing to use an old PSU or are of the mindset "If it ain't broke, don't fix it." Luckily when most Apple II power supplies fail they don't cause damage, or at least none which is apparent. However there is growing evidence that when some power supplies fail the Apple II system in which they failed start to have intermittent issues a period of time after the failure.

It is highly recommended to fully rebuild your power supply or install a Universal PSU Kit. You should NOT rely on an original power supply in any case, or even one 'only' 10 years old, as it can be unreliable. It is also very hard, if not impossible, to fully test a power supply using common bench top tools. Labs use very expensive and specialized equipment specifically made for testing power supplies to certify and calibrate them. Transcat is one such company which not only calibrates your power supply but also documents how and why it fails certain tests. Costs however can range into the upper hundreds of dollars which is why most users decide to replace their power supply with something new and known good, or attempt a rebuild. However without the tools or knowledge to fully test and calibrate a rebuild you're back to just assuming things are working correctly.

Thanks for your support by purchasing your IIc+ Universal PSU from ReActiveMicro! To install your IIc+ Universal PSU you can reference the links below on this page which are the most up to date information, edited and reviewed by Community members like yourself. And in return, should you find something on this page that could be worded or documented better you are invited to create an account and edit things as you see fit. Please feel free to share you experience to help others, as others have shared their experiences to help you.

Generally the Kit can be installed in about 15 minutes and with only light skimming of the installation section on this page. And of course if you have any issues or questions please contact Support.

ALWAYS be sure to disconnect all power from your power supply before opening and upgrading the unit. And be sure to double and triple check the DC output voltages before reconnecting the power supply to your Apple II system. Rechecking will never be a bad idea and we always recommend it.

IMPORTANT NOTES: The Universal PSU design has an adjustable Output Voltage Potentiometer. It comes preset from the factory and locked in place with security adhesive. We HIGHLY RECOMMEND not adjusting it under any circumstances as it could cause damage to your Apple II and void your Universal PSU warranty. Only those with knowledge or need should ever adjust. You have been warned.

BEFORE YOU BEGIN BE SURE TO DISCONNECT THE AC POWER CABLE.

Javier A. Rivera received the first prototype and did a simple set of pictures documenting the install procedure to help others. Thanks Javier for the help!
https://www.facebook.com/groups/5251478676/permalink/10157496148403677/

The prototype IIc+ Universal PSU was produced on March 12th, 2018. Two units were produced. It featured an MTA156 connector on the AC side. Although this worked it was a bit more cumbersome than it needed to be. It was decided the connector would be changed and a production run of PSU be ordered.

v1.0 of the IIc+ Universal PSU was produced on May 6th, 2018. The AC connector was changed to a spring type which makes installation of the wires much simpler for the user.