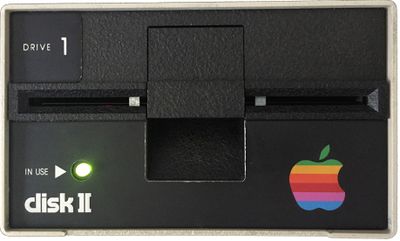 Disk ][+ was conceived, created, and designed by Fabien Bénattou in 2018. It is an electronic device that takes place into Disk ][ drives, the floppy disk drives used on the Apple ][ family computers. Its purpose is to replace the red LED of the drives by a two-color LED, in order to distinguish the reading phases, in green, from the writing phases, in red.

Project Status: Complete. In production. Actively sold by ReActiveMicro as of end of January 2019.

Fabien Bénattou created the first prototype and announced it on the Apple II Enthusiasts group on Facebook on June 10th, 2018.

The transistors need to be placed in a certain direction. They have got a flat side and a round one, see figure 4. The flat side and the round side are drawn on the printed circuit board.