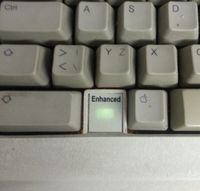 Note: Some ROMs do not has the "-A" suffix on them. Apple was very inconsistent with their markings. It's also possible this suffix could denote batch runs produced by Apple.

Several Video ROMs option were offered by Apple to fit their markets. The "USA" however was the most common. The options were as follow:

This character set more closely resembles that of an 286 PC computer, and has an Apple cursor instead of a "grid" character.