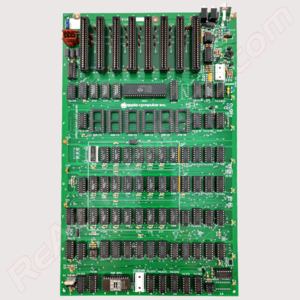 The Apple II plus Rev 7 RFI Kit is a total of 2160 pads or "solder joints" for the 93-Series kit, and 2174 pads for the 27-Series kit. It takes about 5 hours to fully assemble a kit if you have a decent iron, flux, and solder. The parts included with your kit and the PCB have basic labels. Those with intermediate knowledge should have little trouble assembling the kit from the labels on the parts, the bag, and the PCB. The images below of the motherboards can also be used for reference or to determine orientation, such as the diodes.

On June 7th, 2020 Chris Torrence posted a build video of the Apple II plus Rev 7 RFI kit. We highly recommend watching the video before starting your kit as well as fully reviewing this Wiki page.

Note: Cautionary care needs to be taken while installing capacitors and diodes.

If your kit includes Aluminum or Tantalum capacitors, or "caps" for short, then be sure to install them in the correct orientation. The PCB will be clearly marked with "+" signs for all cap locations when the orientation of the part matters, or a polarized part is normally used. Sometimes a non-polarized part is used in place of a polarized one and then its orientation does not matter, however install a polarized cap backwards and you will damage it. An Aluminum Electrolytic will have a strip pointing to the NEGATIVE end lead. A Tantalum Electrolytic will generally have a marking or stripe to denote (not always pointing to) the POSITIVE lead.

Example illustrations of different caps, a diode, and their related markings.

Note: Some ICs are NOT as marked on the motherboard due to changes in the past 40+ years since the release of the Apple II plus. New ICs which are equivalent have been included and are installed in the original locations. Here is a list of those ICs and their locations.

The Apple II plus Rev 7 RFI project from ReActiveMicro comes is two different variations, the 93-Series and the 27-Series boards.

Both motherboards operate exactly the same in all aspects, and are an exact clone of the original from Apple. The only difference is which family of system ROMs are natively supported on the board. The two options are the original 93-Series, and the later and more common 27-Series.

The concept for the 93-Series project is allowing users to retire their existing Apple II, II plus board and rely on the new motherboard board for a modern, rock solid replacement while maintaining that original look and feel. Users only need to swap their existing system ROMs and install the new board. It’s much simpler and less time consuming than a rebuild or to hunt for issues with an original 40 year old board that was built on a budget and not with longevity in mind. In contrast, the high quality parts and sockets used on the new motherboard will last at least another 40 years without issues. No more worry about intermittent issues from month to month. As noted, this version of the project DOES NOT COME with any system ROMs, users are required to swap their existing system ROMs.

The concept for the 27-Series project has all the same benefits listed for the 93-Series project, however this version of the project comes with system ROMs preinstalled. These ROMs are the more common 27-series ICs currently available. This also allows users a more simple option for firmware development and installing other ROMs found online.

The original Apple II and II plus use 9316 ROMs which have 2k storage each. These were 'masked' ROMs which were produced in a factory to Apple's specifications. At the time Apple started designing the II the 93-series ROMs were the only option available at a reasonable price. Later however the 27-series ROMs would be introduced which were less expensive and became the industry standard for several decades.

One of the enhancements of the Apple II plus was that it uses a 27-series ROM for its Character Generator since it was less expensive and the code stored was able to be customized at any time during production unlike a masked ROM. Apple however decided to keep the system ROMs in the II plus compatible with the original ROMs of the II and didn't change over to the 27-series. So 27-series ROMs will not work in an original II or II plus system, and an adapter would be needed.

There are several key differences between the Apple II Revision 0 and Apple II plus Rev 7 RFI. Basically they are the same board, however the Rev 7 RFI has some key enhancements

Apple designed the Apple II and II plus to be used with a PAL display as an option. A small mod is required, and can easily be undone if desired.

Note: Users may want to install square header pins and jumpers for the bow-ties. This would make changing setting a lot simpler in the future and is very inexpensive. Also, adding a socket designed for crystals or just a couple loose machined pins would be a good idea and is also inexpensive.