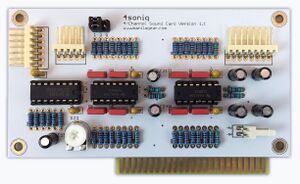 The 4soniq is a quadrophonic (four channel) sound card for the Apple IIGS. Manila Gear has designed the card to interface with the sound expansion connector near the memory expansion area. The 4soniq is capable of decoding and high quality filtering of the Ensoniq Digital Output Chip (DOC) into four separate channels of sound.

The 4soniq was created by Manila Gear in April 2016. It gives the Apple IIGS four separate channels of sound, instead of the usual one. Released software that supports 4-channel sound output include Kaboom! by Ninjaforce; Ninjaforce’s NinjaTracker and Sheppyware’s AmperSound GS. See the downloads section for more software.

Stereo sound is also supported by the 4soniq with high quality, line-output to speakers via the 3.5mm jack. Enthusiasts can unlock all of Ensoniq's 8 channels by pairing two 4soniq cards together!

Sydney, Australia, 29 April 2016—Manila Gear today announced the 4soniq interface card for the Apple IIGS. The card gives IIGS owners the ability to connect up to 4 separate powered speakers so they can enjoy quadraphonic surround sound. In addition to providing four channels of output, the 4soniq gives owners the ability to capture audio with a single channel input digitiser.

The 4soniq was announced at WOzFest /// where Jon Christopher Co demonstrated a prototype 4soniq card for attendees to inspect and use in KABOOM! gameplay.

“It all started when we were chatting about how the Apple IIGS can generate 8 channels of sound, and fellow Apple enthusiast Andrew Roughan wondered ‘if anyone ever attempted such a design.’ John and I checked it out and we decided to give it a shot!” said Jon. “We hope Apple IIGS users enjoy using it and programming for it as much as we have enjoyed creating it.”