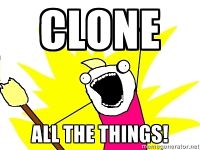 On January 23rd, 2020 ReActiveMicro achieved a goal of moving to a more professional labeling system. This was achieved by using a holographic security solution. All projects sold will be labeled with at least a date code. And most platform specific projects or ROMs will be labeled with a "II" or "IIgs". This will make IDing a board or ROM much more simple for the user, and allow ReActiveMicro to better track items such as those returned for repair.