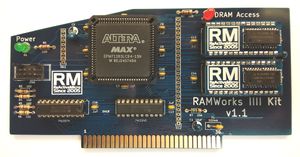 To setup a RAM Drive and use you extra RAM in programs like Copy II + and AppleWorks then we recommend the "PRODRIVE.SYSTEM" program on the Super AppleWorks Desktop Expander v5.3.1 disk image below.

One of the unclaimed prizes however is a more customized tester. Please see the [[Template:RAMWorks IIII Kit|Unclaimed Prizes]] section.

Simple English - What you can and can't do: Software is under GPL affero version 3, OR commercial license. Please send us any changes you make or you can buy a commercial license if you don't want to release your changes. You are not allowed to clone and sell this project to others without approval.