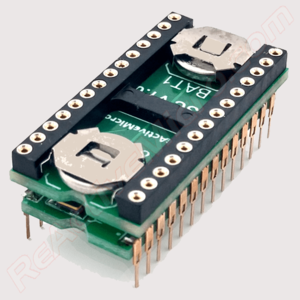 The No-Slot Clock project was started about mid 2014 by Henry from ReActiveMicro, and was officially released on April 12th, 2015. It was inspired by his work on the DClock project. The No-Slot Clock will fit in the Apple //c and //c plus, however not with RAM Card installed.

Product Status: Actively sold by ReActiveMicro. RM is working on other versions of this project, specifically for the II/+ and the IIc. We will post links to those pages once the projects have officially started.

The No-Slot Clock comes with two preinstalled CR1025, 10mm, coin cell batteries. These should last about 1 year of the computer remaining off. The set time may drift slightly when the No-Slot Clock and the Apple II aren't powered up for long periods of time. 'BAT1' is the primary battery. When it is too exhausted to keep the oscillator running the Real Time Clock IC will automatically switch over to 'BAT2'. You can remove either battery, one at a time, without losing the set time. However if you remove both at once then you will lose settings. We recommend replacing both batteries once a year to provide the best experience and to minimize any possibility of damage due to leakage. Be sure to always use a well reviewed brand of battery.

v1.3 was the last stable release version from UM. All issues mentioned above have been resolved. And the project was discontinued in mid-2016 when ReActiveMicro returned from hiatus.

The ReActiveMicro No-Slot Clock v1.0 proto.
Development started in late 2019 once Henry was able to source Lead Frame pins. The pin allow 'legs' to be mounted to the edge of a PCB, which creates a DIP module. The legs are identical to DIP ICs, so there's no longer any socket stretch issues as with all past UM designs. And the new design also allows for the project to be factory assembled to help reduce costs and allow for better stock and quality control.

There was one known issue with the current design.

The No Slot Clock design is well tested in the Apple II. So far the only known issue exists with the Microsoft Z-80 SoftCard. No damage will occur, however the Apple II will tend to lock up on boot.