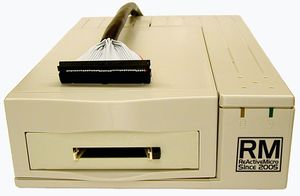 The External CF Drive from 2006

Project Status: Reopened and under developed.

Sales: Out of production / No stock.

Since the development of CF Card Mass Storage solution like the MicroDrive users have needed to open their Apple II systems in order to access their CF Cards. For many this can be an inconvenience as many system setups have Drives and Monitors on them. Disconnection of peripherals and cables may also be required, adding to the time required.

CF Card access is required when the user wishes to backup or transfer files between the Apple II and PC/Mac.

Features Of The Universal PSU Kit[edit]