Since the development of CF card mass storage solutions like the MicroDrive, Focus Drive, and CFFA, users have needed to open their Apple II systems in order to access the CF card. For most users this can be an inconvenience as many system setups have drives and monitors stacked upon them. Disconnection of peripherals and cables may also be required, adding to the time required. CF card access is required when the user wishes to backup or transfer files between the Apple II and PC/Mac.

The External CF Drive was also produced for a short time in 2008 in an aluminum enclosure. Due to other business projects, slow sales, powered external floppy enclosures becoming harder to find, and the amount of labor needed to construct an External CF Drive, sales were suspended at the end of 2008 until a better solution could be found.

In late March 2017 the project was reopened and development started once again. A lot had changed since the last time the External CF Drive was offered for sale. Custom enclosures were now possible which allowed for a much better solution at a lower cost. v2 of the External CF Drive was released for sale on August 5th, 2017 in two painted colors to best match the II plus, IIe, and IIGS. The v2.0 case design is an homage to the classic DuoDisk Drive. 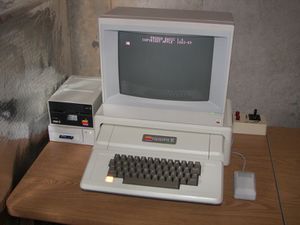 Example Of External CF Drive From 2006 In Use 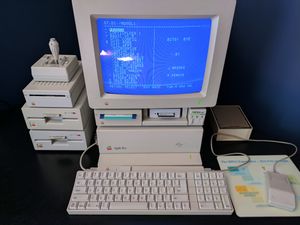 The External CF Drive allows for a more user friendly experience when using a CF card on the Apple II platform.

Installing the External CF Drive v2.0 is safe, simple, and fast if you follow these instructions.