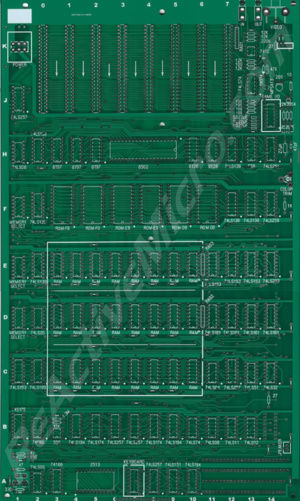 The Apple II REV 0 project was created by Mike Willegal in 2007 and the project was abandoned shortly after. In 2019 Logan Greer decided to continue the project and start to produce boards. On April 09,2019 Logan ordered 5 blank PCB boards from JLCPCB and also announced that he was selling them as blanks, and added options for a PCB with minimal sockets soldered, or a completed hand assembled and tested board.

Currently Logan is partnered with ReActiveMicro for sales and distribution, and Henry offers technical and project guidance as requested.

The Revival Of The Rev 0 Project. In late 2018 Logan discovered Mike Willegal's website and took interest in his Rev 0 project. He found the idea of reproducing the Rev 0 PCBs an interesting proposition. Interested in learning new things, Logan decided in early 2019 to order some PCBs with the intent to build a working unit and selling the extra boards to the Community. He announced his project in the Apple II Enthusiast's group on Facebook shortly after.

On April 09,2019 Logan ordered 5 blank PCB boards from JLCPCB. He also started to scavenge parts from a broken II+ he owned, and ordered the rest needed to complete an assembled a board.

By May Logan already sold a few blank boards.

In early May Logan contacted Henry to discuss the project and ask for advise about parts, production, and having ReActiveMicro assist in selling the boards.

If you purchased a Kit then the parts included as well as the PCB have basic labels. There are over 2000 pads which will need to be soldered. Those with intermediate knowledge should have little trouble assembling the kit from just these labels. The images of the motherboard can also be used for reference or determine orientation, such as transistors and diodes.

All caps will have value markings on them. "106" is 10uF, and "104" is .1uF for example. 10uF is also physically a lot larger than .1uF. This should help identify the ceramic caps in the kit. They along with the Electrolytic caps can also clearly be seen in the assembled pic above.

Your kit will include resistors. If so, they could be the less precise "4 band" style which are typically 5% tolerance. Or the more precise "4 band" style which are typically 1% tolerance. Here are some charts on how to read them to help make matching locations on your PCB more easy. On the II Rev 0 board the values of the resistors are also printed on the board.