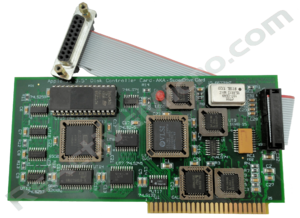 The Apple II 3.5" Disk Controller Card, also known as the SuperDrive Card, is a 3.5" drive controller card for the Apple II, IIplus, //e and IIGS designed originally by Apple Computers. The card allows a simple way to connect a 3.5" Disk Drives to the Apple II computers. All Apple drives are supported, as well as AE and some other clone drives. A total of two drives can be added by using the card.

In 2006 ReActiveMicro was successful in cracking and testing the PLDs on the Apple II 3.5 Disk Controller Card. This is the first step in producing a newly manufactured duplicate card.

On 2016-02-10 Henry re-edited the layout, slightly updated the Silkscreen layer, and incremented to v1.1. Ten more Proof of Concept PCBs were ordered to reprove the design changed and sell. Up to this point all boards produced were hand assembled.

On 2016-03-25 Henry continued to edit the v1.1 design to support a smaller Resistor Network, utilizing the newer WDC C02 CPU, 27 and 28C/F series EPROM, fuses on the power lines, and SOJ SRAM. He also tented all vias and added a Silkscreen layer to make assembly much simpler. The design was incremented to v1.2, however it was plagued with issues due to many changes at once combined with CAD issues. Ultimately the design was abandoned and the project was rolled back to the known good starting point of v1.1.

On 2018-05-09 the project was revisited due to demand and others who had failed attempts in making a 3.5" Drive Controller of their own. Henry re-edited the project hard by changing the footprint for the Resistor Pack to something more commonly available in today's market. He also edited the CPU footprint to allow for use of the newer WDC 65C02 CPU. All PLCC parts were socketed so the boards could be factory assembled, which marks the new direction ReActiveMicro has taken since its full return back to the retro scene in mid-July 2016. The original Silkscreen layer was added back to the board and cleaned up to make it more readable. The name was also changed from "A2DiskController" back to the original "Apple II 3.5" Disk Controller Card". Henry also added "AKA - SuperDrive Card" to the name since some people in the retro community know the board by this slang name.