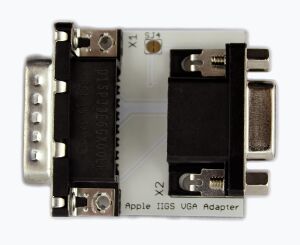 The Apple IIGS VGA Adapter was created by Manila Gear in June 2016. It allows use of the Apple IIGS on VGA monitors that support 15kHz.

The Apple IIGS VGA Adapter was created by Jon Christopher Co and John Valdezco of Manila Gear in June of 2016.

John had been using the Gonbes GBS-8800 frequency upscaler board with a VGA monitor on his newly acquired Apple IIGS. John wasn't happy with the video output and the clutter associated with having an extra board and power supply for the Gonbes board. So John and Jon set about finding a simpler, better video solution! The result of their research efforts was the VGA Adapter.

Obtaining high quality video output from the Apple IIGS is complicated by the DB15 connection, composite only sync and high pixel clock rate.

The Apple IIGS outputs analogue RGB video with composite sync on pin 3 at 15kHz horizontal scan. This adapter plugs directly into the IIGS DB-15F video out and outputs a 15kHz RGBHV signal over HD15/VGA. The VGA signal is generated by accurately extracting the video timing information (sync) and stabilising the colour information.

The adapter is capable of stable output of all video modes supported by the Apple IIGS including 640x200 SHR (Super High Res) with proprietary 16.36 MHz dot clock. The connecting monitor needs to be primarily compatible with 15kHz horizontal and can be a CRT or LCD screen. The Samsung SyncMaster 710N is well regarded as a good value LCD monitor that is compatible with the Apple IIGS VGA adapter.

Version 2.0 is currently sold by ReActiveMicro.