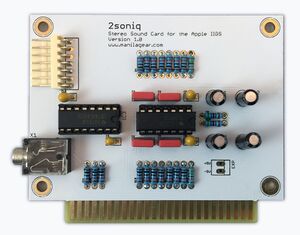 The Apple IIGS was promoted for its unique Graphics and Sound capabilities. It uses the 5503 Ensoniq Digital Oscillator Chip (DOC) to produce realistic sound effects and music as well as sample inputs such as voice and instruments. This professional grade chip is unfortunately limited to mono output via the 3.5mm jack on the IIGS due to a design change at Apple.

The 2soniq overcomes this limitation. Stereo sound is unlocked by interfacing to the Ensoniq DOC directly. Manila Gear designed the 2soniq as a high quality yet cost effective solution to overcome previous IIGS sound limitations. Almost all Apple IIGS software is compatible with stereo sound and existing software such as instant music natively supporting 2-channel output with the 2soniq.

The 2soniq is quick to install and requires no special software or drivers to begin experiencing stereo sound output. Excellent compatibility can be expected as the 2soniq uses a 3.5mm stereo jack for use with powered speakers.

Manila Gear created the 2soniq in April 2017 and has joined the many partnerships at ReActiveMicro to sell and distribute the card.

Enthusiasts can unlock further capabilities of the IIGS by purchasing the 4soniq - a four channel sound card also designed by Manila Gear.