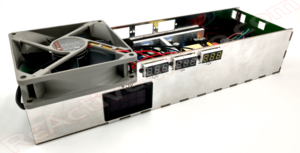 The Universal PSU Enclosure is designed by [ReActiveMicro] to be an inexpensive PSU enclosure replacement and installed by the end user.

As the name implies, the enclosure supports the Apple II, II Plus, //e, IIGS, and most clones. It was conceived, created, and designed by Henry of ReActiveMicro and released for sale to the Apple II Community on date. It's a simple to assemble, fun kit for anyone who needs a new PSU for system missing one, wants to retire their old PSU while keeping it original, or for a decent all-in-one bench supply.

The kit comes as several panels which are soldered together. It's very simple and quick to assemble, like legos, and most users won't even need instructions. However with all our kits, we highly recommend at least skimming to quickly review.

The Universal PSU Enclosure Kit comes with meter and fan options. Below is how to correctly wire in those options.

When Henry created the Universal PSU Kit in 2015 he also started research in to what it would take to create a custom enclosure. The initial concept was going to be a full clone of what Apple Computer produced. However any metal enclosure would be about $1k or more for single proto units, and at least $85 per unit in quantities under 250 units. These prices meant either metalwork had to come down in price, or some other material would be needed.

Henry then started to look in to 3D printing in conductive composites and even metalized plastic. Although these did mostly work, the price was still very expensive and the metal coating in most cases wasn't very durable. Several hobbyist in the retro Community contacted Henry to possibly offer help, however all these offers ended in the same thing being learned - working in metal is very expensive. So Henry would need to find other options.

In 2018 Ultimate Apple 2 (UA2) completed their own project called the Ultimate Enclosure. It was fully metal, and in the style of Apple Computers it consisted of a case and a lid. The retail price was $95 and released on October 5, 2018. During this time Henry had been busy with other projects and didn't want to compete with UA2, especially with their added risk with a large investment due to the cost of metal work. Stock of enclosures was however single/closed source and not always available, Also the current design left some room for improvement. So Henry continued with research and ideas. Assuming UA2 doesn't do anything more with the design perhaps it will be viable to continue with the planned project.

Several ideas and materials were tested. Meters, fans, and kit ideas were all researched. In July 2020 an old CAD design was revised and a new proto completed and ordered. The new material allowed such low cost production costs and versatility that the project could be ordered factory assembled or in kits for end users to assemble. The cost was also a 10th or less of metal, and unlike metal it allowed for parts to all be produced flat which would save in space with stock and shipping.

Once the initial proto was assembled it was clear this concept was viable and allowed for simple changes and features to be added in the future with little or no costs for tooling, unlike metal. Meters and fans were added shortly after, and custom DC Output Cable designs were worked out to keep costs low and to allow maximum flexibility for the end user

In 2015 research in to what it would take to create a custom enclosure. Several PSUs were evaluated and several well versed Community members consulted as to their input. We decided to use a 'long' IIgs PSU which would allow for IIe and IIgs usage with no changes. However this PSU was too long to fit in the II and II Plus due to the placement of the speaker. In an attempt to produce only one version of the enclosure a modification would be needed to allow the user shorten the enclosure at will. Two main options seemed possible. One being a removable bracket, and the other being a way to snap off the enclosure. The issue with a snap off solution would be possible sharp edged and a risk of getting injured.

The initial designs started in 2017. Several companies and Community members provided CAD and ideas for a simple yet versatile layout.

This initial concept touched on some key points. First, in order for the design to be low cost it would not come with a cover standard. Possibly it would be an option, but the costs for just a simple cover was over $20 each. A cover isn't functional or useful for anything except to keep heat in or hands out. Since it's almost impossible to be shocked by our Universal PSU once it's mounted we didn't see much use for a cover even from a safety standpoint. And next thing we knew we needed for this design would be some kind of side feature to help add some rigidity to the long piece of metal. We also strived to keep the design in one sheet and as simple as possible to keep the costs to a minimun.

The following design tried to improve the strength things as well as improve safety with edge bends. So no more sharp edges, but with added costs and complexity.

The next design was also the last with metal in mind. This version also incorporated a user breakable end to allow the enclosure to fit in a II and II Plus case. Although the concept works, it's a share edge and some care is needed when making the bend.

A lot was learned with these protos. The main issue with these designs in metal is there's no 'simple' way to change or fix anything, to allow for options such as fans or meters. All new revisions would take weeks to create and cost hundreds or even thousands of dollars to produce only a few samples. The metal concept and design was forged by Apple Computers, with it's main feature being strength, followed by its conductivity. Perhaps there are other, more modern materials which could better fit our needs and be simpler to work with and at a lower cost.

While research, fitting, and refinement was going on Ultimate Apple 2 (UA2) released their "Ultimate Enclosure" in mid-2018. So our main development stopped for a while to help judge the market and actual demand, to receive some actual end user feedback, and help make sure UA2 was successful in recouping their initial investment. The most common comment we received was about the amount of cost, followed by being impressed by the quality. So it seemed we were on the right path for an enclosure project.

In 2020 stock for the Ultimate Enclosure started to become erratic due to the COVID pandemic mixed with the complexity of the design. At this point there had been several runs produced and the design didn't really change. So it seemed a good time to look back in to the Universal PSU Enclosure as it had become officially now named and not only offer a less expensive solution, but also one with many more options such as fans for active cooling and meters for those looking to know there PSU's output or to help measure a peripheral's draw.

New designs were produced which were low cost, allowed for many options, strong, and conductive. The new design also allowed for kits to be produced which would also help lower retail pricing as well as improved bulk ordering. This new version also help prove the project as being possible to produce and some ideas about costs. Now options could be looked in to.

The next proto revision came with new, longer sides to help with stability in the IIgs. It also was the first time fans and meters were being testing in-system. Now final touches could be added to the design, a firm BOM worked out, and production pricing start to be quoted. Sample units were sent to a few beta users to help create the Wiki page as well as for feedback about assembly of the kits.